A semi-detached detached farm house in the heart of Carmarthenshire, littered with features of tradition and heritage, Yet, the proposals needed to amalgamate they past and present into a form that serves the modern needs of the client. The brief demanded a space of two worlds, accessibility and a modern living-kitchen space.

Due to the age of contraction methods of the adjoining farmhouse, the internal floor level on the existing extension at the rear is near flush with the external level, therefore the existing windows have a lower head height. To meet regulations, the doors were set back to gain 150mm to insert the new floor structure in the proposed extension. As a result, the windows now line up horizontally on the existing and proposed rear elevation. A subtracted architectural form developed from the assets that had been dealt; now, a sheltered porch area, set back from the the elements - a buffer zone that nods to its agricultural heritage of barn doors. 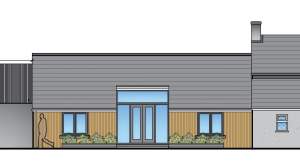 Storage is often a forgotten necessity with modern design, therefore has been created via sliding partitions accessed via the kitchen. The bedroom also has its own large storage area that stretches the length of the space. The storage also provided an additional sound buffer from the road that runs to the south.

As the new living spaces would own the title of main entertaining spaces, it was imperative that the feature lobby area lent itself to the space. The rendered image shows the envisaged layout in terms or furnishings. The kitchen and living will serve the whole house, thus, a vaulted ceiling and open plan arrangement would dramatise the the space.

To induce the sense of height in the space, roof windows were added to seduce light into the space - a juxtaposition from the existing dark and cold barn structure. 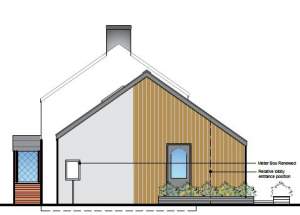 The external finish of the proposal is a mix of render to the roadside frontage and a vertical timber cladding system to the rear that folds and partially hugs the side elevation - bringing a warm feel to the external. A modern material with traditional feature, in cement fibre board with timber impressions. In light oak. The material is low maintenance and clinical.