In December 2014, Carmarthenshire County Council implemented their current development plan which, amongst many other policies, included changes to affordable housing.  Headlines as follows: 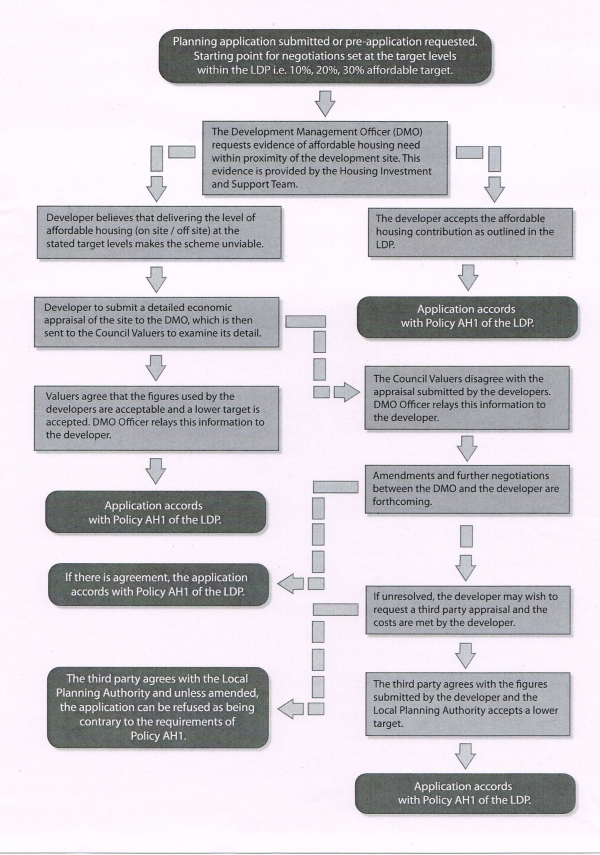 Where viability at the target levels cannot be achieved, variation may be agreed on a case-by-case basis.

Proposals will be required to ensure that the dwelling remains affordable for all subsequent occupants in perpetuity.

6.2.52
Policy SP6 and background evidence has identified variations in residual values achieved across the County and this is reflected within this policy. The Council will seek to maximise contributions on sites where it is deemed to be viable to do so, up to the 30%, 20% and 10% affordable housing targets identified for the submarket areas as set out below and identified on the Proposals Map. The Council will use these targets as the starting point on viability negotiations. Policy AH1 acknowledges the role of negotiations and where applicable, allows the Local Planning Authority and developers to agree upon an affordable housing target if a lower viability is justifiable and necessary for a development to come forward.

6.2.53
Further clarification on site viability and commuted sums is identified in the Affordable Housing SPG.

Proposals for 100% affordable housing development on sites immediately adjacent to the Development Limits of defined settlements (Policy SP3), will in exceptional circumstances be permitted where it is to meet a genuine identified local need (as defined within the Glossary of Terms) and where:
a.      The site represents a logical extension to the Development Limits and is of a scale appropriate and in keeping with the character of the settlement;
b.      The benefits of the initial affordability will be retained for all subsequent occupants;
c.      It is of a size, scale and design compatible with an affordable dwelling and available to low or moderate income groups;
d.      There are no market housing schemes within the settlement being, or projected to be developed which include a requirement for affordable housing.

6.2.54
The granting of planning permission will be subject to conditions or planning obligations which ensure the affordable housing remains available to meet future local affordable housing needs. For clarity, development sites which include 100% affordable housing must accord with the criteria of this policy. Exceptions sites will only be permitted where satisfactory evidence is available which supports the provision.

6.2.55
Exceptions sites should not generally be considered in a settlement where existing allocations are being brought forward and an element of affordability is being provided as part of that development. Evidence will be required to demonstrate that no schemes on allocated sites are projected to commence within a reasonable time period.

6.2.57
Regard should be had to paragraph 6.6.20 and the effect of proposals on European protected species.

6.2.58
Further information is provided through national policy in the form of PPW: Edition 7, TAN2: Planning and Affordable Housing and TAN6: Planning for Sustainable Rural Communities. Further elaboration and guidance on the implementation and interpretation of affordable housing will be set out in forthcoming SPG.

Proposals in the open countryside for affordable housing for a single dwelling will be permitted within settlements, hamlets and groups of dwellings without Development Limits where it is to meet a genuine identified local need (as defined within the Glossary of Terms) and provided that:
a.      It represents sensitive infill development of a small gap within an otherwise continuous built up frontage; or, a minor extension which does not result in ribbon development or perpetuate existing ribbon development;
b.      It is of a scale and size appropriate to, and in keeping with (and not detrimental to) the character (including landscape and townscape) of the area;
c.      The benefits of the initial affordability will be retained for all subsequent occupants;
d.      It is of a size, scale and design compatible with an affordable dwelling and is available to those on low or moderate incomes.

6.2.59
PPW: Edition 7 reflects the need to strictly control developments away from existing settlements. It does however, also recognise that many parts of the countryside have isolated groups of dwellings and that sensitive infilling of small gaps and minor extensions in such groups may be acceptable (Para.9.2.22). There are a notable number of ‘small settlements, groups of dwellings and hamlets’ throughout the County which have not been defined within the settlement framework, and as such do not have development limits. Such settlements or groups of houses often display little or no sustainability attributes, are sporadic in nature, and/or contain insufficient physical mass or facilities to warrant definition. However, there may be justifiable instances where proposals for an appropriately sited single dwelling may provide for affordable housing to meet a genuine identified local need. Whilst such opportunities are likely to be limited, they can make an important contribution to rural areas and their communities.

6.2.60
The policy balances the need to protect the countryside and control development whilst recognising (in accordance with TAN6) that non-accessible locations may also prove acceptable where it is intended to meet local needs. It also recognises the potential for priority to be given to local needs in what are largely rural areas (TAN6: 4.1.2). The consideration of proposals will, in addition to the above, have close regard to the requirements of guidance and the need to protect the cultural, landscape and environmental qualities of the County.

6.2.61
The definition of local need is set out within the Glossary of Terms.

6.2.62
Regard should be had to paragraph 6.6.20 and the effect of proposals on European protected species.