Burry Port is set to welcome an additional lighthouse.

But all is not quite as it seems.

The new lighthouse will be added to Moreb Roundabout and will form an eye-catching part of the display ahead of this year's Wales In Bloom competition. 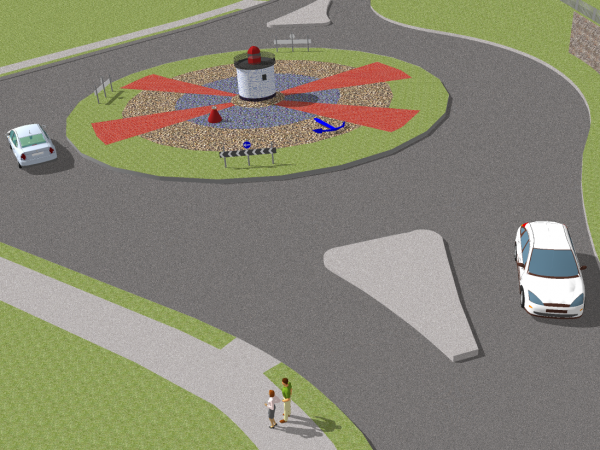 The application for the structure was submitted to Carmarthenshire Council's planning department on April 15, but no decision has yet been made.
The lighthouse will stand at four and a half metres tall and has been designed as an exact replica of the town's iconic harbour structure.

However there will be one crucial difference between the original and new lighthouse, revealed architect David Darkin.  "There is no light in this lighthouse, ironically," he said.  "It could be a hazard to traffic so we were unable to add a light."

Councillor Shirley Matthews said the lighthouse design would symbolise a gateway into Burry Port and reflect the town's rich heritage as they prepare to enter the Royal Horticultural Society competition once again this year.  She said: "This lighthouse design shows off a part of our heritage and there is nothing like it anywhere else.  The flower beds last year were very attractive and attracted so many people to Pembrey and Burry Port, but they were very labour intensive.  This year we are looking to make a more sustainable and cost effective display.  There will be more sustainable planting which will require very little maintenance.  We are aiming to reduce our spending on flowers and have received donations towards the lighthouse to keep the costs down."

The plans also include planting wild flowers on three other roundabouts in the towns, with the overall costs estimated to be around £4,000.

Architect Mr Darkin said his team had to consult with the highways department ahead of constructing the lighthouse to ensure it does not obstruct motorists' views.